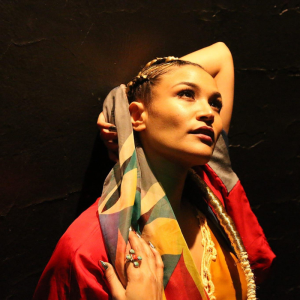 Lady Midnight was recently honored as one of the “best new bands of 2016” by First Avenue and The Current. We can’t wait for her to perform with DJ Keezy!

Andrea Swensson had this to say about Lady Midnight:

“There’s never been a better time to take a closer look at this entrancing singer…as she emerges as a solo artist. It’s hard not to picture Sade lounging on a yacht in the Caribbean, or Lady Midnight herself coolly driving around town with the top down.

I first saw Lady Midnight performing in the Afro-Cuban band Malamanya, and shortly afterwards caught her singing with the sultry electro-pop group VANDAAM. In both cases, I was mesmerized by her presence on stage. Regardless of the style of music she’s playing or the language of her lyrics, Lady Midnight holds court with what can only be described as a vibe; she emanates calmness and confidence, like she is truly centered when she is on stage surrounded by music.

Although she’s been active in the Twin Cities for years, now is the time to turn our attention toward Lady Midnight’s abilities as a solo artist. She’s started releasing new music at a promising clip, including a new single produced by ZULUZULUU’s MMYYKK; a short mixtape-style EP that features a cameo from Maria Isa and re-imaginings of songs by Beyonce and Anderson Paak; and a sweet summer jam called “Wax Line” that she created with the producer Afrokeys that hints at a bolder, poppier new direction.”